Buckaroo will be relocating their manufacturing operations to Albury in Early 2020, creating up to 20 new jobs plus eight existing employees following the company by relocating to the region.

Tanya will share the story of Buckaroo and how the culture of the company drives the delivery of high-quality, Australian made products and, a following of dedicated staff. 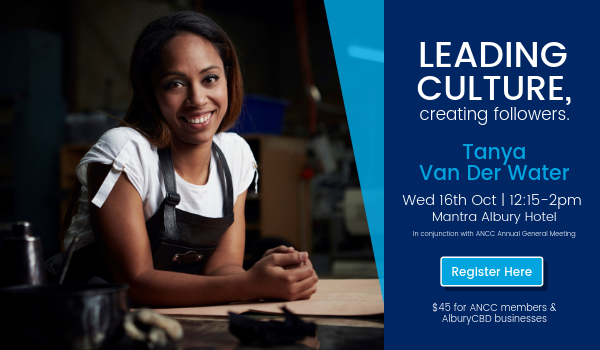 About Buckaroo:
BUCKAROO LEATHERWORKS IS MORE THAN JUST A BELT MANUFACTURER, IT’S AN ICON THAT EMBODIES THE ETHOS: “IF YOU AREN’T DOING A JOB RIGHT, DON’T BOTHER DOING IT AT ALL.”

A brand with this heart and personality is not built overnight. Buckaroo traces its humble beginnings back to Cape Town, South Africa, 1971, where a costs and works accountant – Ken Van Der Water - turned his leatherwork passion into a small shop called ‘The Leather Nook’.

And that was just the beginning…
Ken started out as a one-man-band. He both crafted and restored beautiful leather goods. In 1980, South Africa’s loss was Australia’s gain when Ken and his family moved to Wollongong, a large coastal and industrial city located an hour south of Sydney Australia. Ken continued his leatherwork, renaming the business to Buckaroo Leather. If you’re looking for the definition of a family business, Buckaroo was it. Ken maintained his stature as a one-man-band in Buckaroo’s early days, but eventually went on to employ some craftsman and a few sets of small hands (aka: his children) who created plaited and laced belts in exchange for pocket money. This was when Ken passed on key business principles such as product costing, which daughter Tanya Van Der Water [today’s Buckaroo second-generation owner] still finds herself drawing on today. The 70’s and early 80’s were all about crafting those heroic, quality, custom leather goods that were made just-for-you by a true leather craftsman. Think leather boots, belts and handbags with beautiful carvings and embossed designs in the leather.

In 2002, Ken’s daughter, Tanya, joined him at the helm, seeing a fusion of the old and new, catapulting Buckaroo into the 21st century. When Ken passed away in 2012, Tanya took the reins completely, along with a dedication to stay true to Buckaroo’s core values of integrity, collaboration, dedication, innovation and above all, family values. Tanya’s passionate and positive outlook drove the company upwards and Buckaroo’s expansion plans began. Since Ken’s passing, the company has grown significantly creating an unrivalled legacy where the world is its oyster.
Location:
Mantra Albury Hotel
Fees/Admission:
$45 for ANCC Members and AlburyCBD Businesses
Includes Hot & Cold Canape Platters and Tea & Coffee
Set a Reminder:
Business Directory News Releases Events Calendar Member To Member Deals Marketspace Job Postings Contact Us Information & Brochures Weather Join The Chamber